'Tis the season...
Let it Snow...Let it Snow...Let it Snow...
Back in 1989 I was doing a simple shot for Macy's Advertising. Some sort of shot involving Macy's "Bayberry Row". This is the place at Macy's where they set up their annual Christmas shops. I was asked to photograph it for some simple local newspaper ads. The displays that year were ok, but not terribly exciting. The art director (Kris Knight) wanted a shot of the "feel" of this area of the store. As usual, that evening was just my assistant and I. Nobody wanted to stay up late doing this sort of stuff. The photography usually starts when the store closes. My assistant Kevin and I decided to add a little extra... 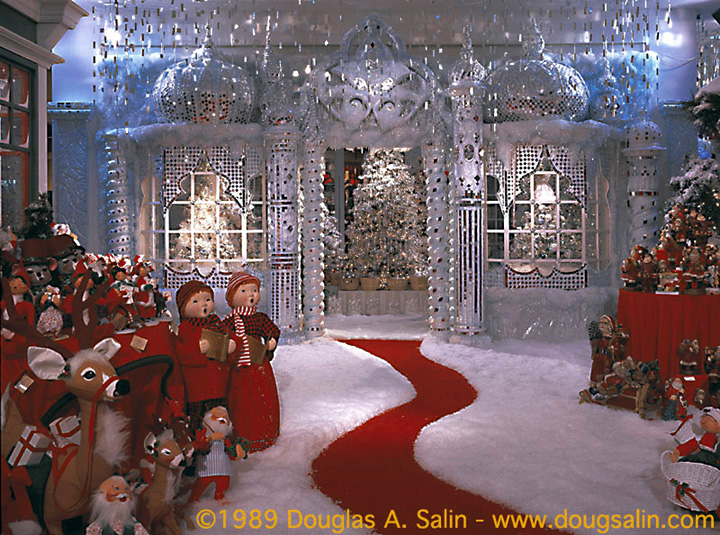 When I composed the shot in the camera, it was very ho hum and boring. I was confronted with too much red carpet and floor space.
I was a little stuck for ideas. I felt the client would not be pleased with a straight forward typical shot. I needed something exciting and different. I had noticed that the displays all had snow around them, so the edges of the corridors all had fake snow already. I reasoned that if I added more snow to the shot, it would be possible to clean it up later when we were done.


The task was to find snow at 1:00 am in the morning with the store closed. Since the display people were all gone, there was no one to call. I had worked as an employee for Macy's from 1977 to 1982, I was very familiar with the store. I currently did work for the display department as well. I decided to take a little hunting expedition to the display department. At 1 am not much was going on and with a little effort, I managed to snag 3 large boxes of the fake snow.

Next I put masking tape on the red carpet in the shot to trace out the area of the path. The snow was added (thrown), just covering the tape. A vacuum was needed to pick up the loose snow. This stuff has many small pieces that are difficult to pick up. The path at its narrowest is perhaps 10 to 12 inches wide. Ar the widest it is 3 feet wide. The camera lens does not pick up these discrepancies in widths. So the path is somewhat believable. It was a nice effect that went over well with the client. It was different, but worth the effort. After LOTS of shoveling, the snow was returned to the boxes, and the boxes returned to the display department.

PS - Lighting.com produced an interview with me this month. See it at:

PPS : I might be traveling to Dubai, U.A.E., in early January, 03. If you have a site that needs a shot in either London or Dubai, let me
know. Thanks.