As a photographer, I'm privileged to be in some unique places.

It was late in September, when KC made it's final road trip of the '96 season to Camden Yard  in Baltimore to play the Orioles. The playoffs were on the minds of everyone.  The batter for KC was nervous with the game on the line, and 2 out in the ninth.  All was going well for the O's with the lead, until this pitch...


This is an image of one of the unsung heroes of my portfolio.


Taken in late 1996 in Louisville Kentucky at an establishment renowned  for making the world's finest baseball bats(not balls).  We are a factory showroom of themed exhibits for the Hillerich & Bradsby Company of Louisville, Kentucky.  The home of H&B otherwise known as the Louisville Slugger.  The "Slugger Museum" as it is called, takes you on a journey from tree to bat, capped with a tour of their factory, which produces bats for all levels of baseball.  All of this is right in the middle of downtown Louisville.  It actually fits right in with the surroundings.  They have several dioramas inside of various baseball situations featuring their bats.  This pic is the simulation of a batter at The Park at Camden Yard  in Baltimore.  Astro turf is used instead of grass and a very forced perspective helps the display.  The outfield is a large billboard sized photo of the real Camden Yard .  The assemblage of elements works quite well?

As a photographer(and baseball nut) I was puzzled to find no baseballs in a museum dedicated to the creation of legendary bats. Sort of a "duh" moment.  It occurred to me(late in the evening) that for this angle to have that special impact it needed a Ball.  Ever try to find a ball at night in a bat factory?  My client (and assistant), Kirk Davis from Lutron Electronics was extremely helpfull.  We asked everyone including the night watchman(these things often happen at night) if he knew where we could find a baseball.  "Well Son, you're in the wrong place for a baseball, would you like a bat?", was the most frequent response.  Or, "What's a baseball?"  Two balls were eventually found, one new and one close to new.  The older of the two was roughed up and rubbed with brown chalk to give it some character.

Now it's time to suspend the ball in just the right spot.  Prior to the days of massive PhotoShop retouching this used to be much harder.  I used a very fine black tungsten wire(very thin and very strong) to suspend the ball.  A black Sharpie marker is applied to the wire to kill any additional highlights.  It took some time for the pendulum effect to stop moving the ball side to side.  With an exposure time around 1 minute, it would look weird for the ball to be arching side to side. The ball eventually stopped moving.   For the final film the ball was given a slight rotation to soften the seams and give it some realism.  Hence the moving ball is floating in space without any visible means of support.

The sad part of the shoot is that the Client never published the images(their loss, they had their reasons).   Maybe they will some day(hint)?

This image remains one of my most favorite.  Enjoy. 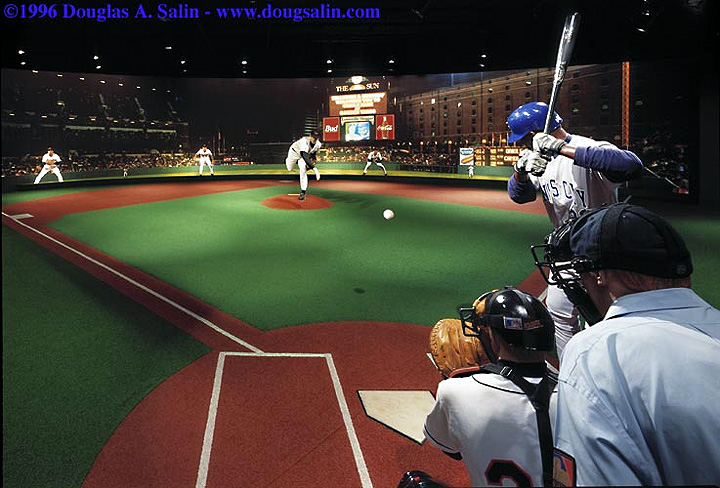 Previous Pics of the Month can be viewed at:

In Major League Baseball, Louisville Slugger bats are used by over 60 percent of all Major League Players, including the game's best hitters like Ken Griffey, Jr., Tony Gwynn, and Derek Jeter.

Compared to the great sluggers of yesteryear, today's pros use more lightweight bats with thinner handles.  Approximately 30 percent of the players using Louisville Slugger bats have the bats cup balanced, which means up to three-quarters of an ounce of wood is scooped out of the end of the barrel, also making the bat lighter.  Lighter bats help today's pros swing faster and send the ball further.

The vast majority of bats today are made from white ash, but a small percentage of professional players have recently begun trying bats made of maple.

The Louisville Slugger is the Official Bat of Major League Baseball.

Nice work! and a lot of fun information. It's a remarkable picture because of the low lighting. In order to "freeze" the ball like that, you'd have to use strobes, bright. Good timing, too. Funny how you didn't mention that BB guy and his maple bat.
RE: skinny bats: Babe Ruth was famous among all his other achievements for carrying a "war club" of a giant bat. I'd be more impressed with today's heavy hitters and their Popeye forearms if they swung heavy lumber like the Babe, and not those skinny little toothpicks. Then they'd have to wear bigger elbow braces just to bring those things up to their shoulder. And thicker batting gloves. Sheeesh.

I saw a photo essay once of how a bat works, using stroboscopic photography, maybe you've seen it? The popularity of skinny, whippy bats, among batting coaches, anyway, apparently dates from this photo study. What they discovered was that at the moment the bat contacts the ball, the bat actually flexes back at the handle slightly, then springs forward as the hitter brings it around, giving the bat a dynamic whip effect against the incoming ball. The narrower the handle, the more flex in the bat, the more spring in the swing. The photo series also showed that at the moment of impact the ball squishes up against the bat, forming an oblong, then rebounds into its spherical shape. This gives the ball springiness and a little more momentum off the bat. So the combined effect of a well-hit ball squeezing up against the meat of the barrel, and the bat flexing back then whipping it out, equals a McCovey Cove splashdown.