Hi Folks,
Pick of the Month #3 is a shot from 1998 of an ill fated restaurant named Loongbar at Ghirardelli Square in the Fisherman's Wharf area of San Francisco.
A wild and exciting Space. Unfortunately the food critics were less than kind to this one... It closed in only 13 months.

This image done at dawn was part of two "all nighters" at the restaurant. Always fun to begin at closing, which in this case was 11:00pm and then work until the sun comes up and the morning and the employees start streaming in. The restaurant provided no extra help on this one, so we styled with what we could forage. The highlight of this image happened when the shooting was done. Ron Igoe had done a great job of lighting the three huge(12")candles atop the pagoda display in the center.
Wonderful and I'm sure expensive beeswax candles with 1/2 inch wicks. I must say they look quite nice. They were new and had never been lit, but we decided that they would add an extra layer of excitement to the final image. The decision was made to light the three huge candles. Have you ever tried to blow out a candle with a half inch wick that has been going for an hour? I've got news for you, you can blow all you want, it will not go out by blowing without spraying hot wax all over. We considered water, but ruled it out. (this eventually was the right solution) Ron's brilliant and memorable solution was to snuff the candles with a small drinking glass. Here's where the memorable physics lesson comes in. Candle, fire, drinking glass, oxygen, Vacuum??? Did anyone guess vacuum? Well the fire went out, and at the same time consumed any remaining oxygen in the drinking glass( on top of this warm mushy beeswax candle). For those of you who have ever seen an egg sucked into a narrow necked bottle with the aid of a match, then you guessed it. The vacuum created by the lack of oxygen in the glass abruptly and mightily pulled the glass several inches into the huge candle with a death grip. After 30 minutes of hard work the drinking glass was saved. The candle didn't look so good, but fortunately the top was not visible from the floor level. Sometimes what seems like a simple solution is not. The water worked just fine. Lesson learned. Enjoy the image. 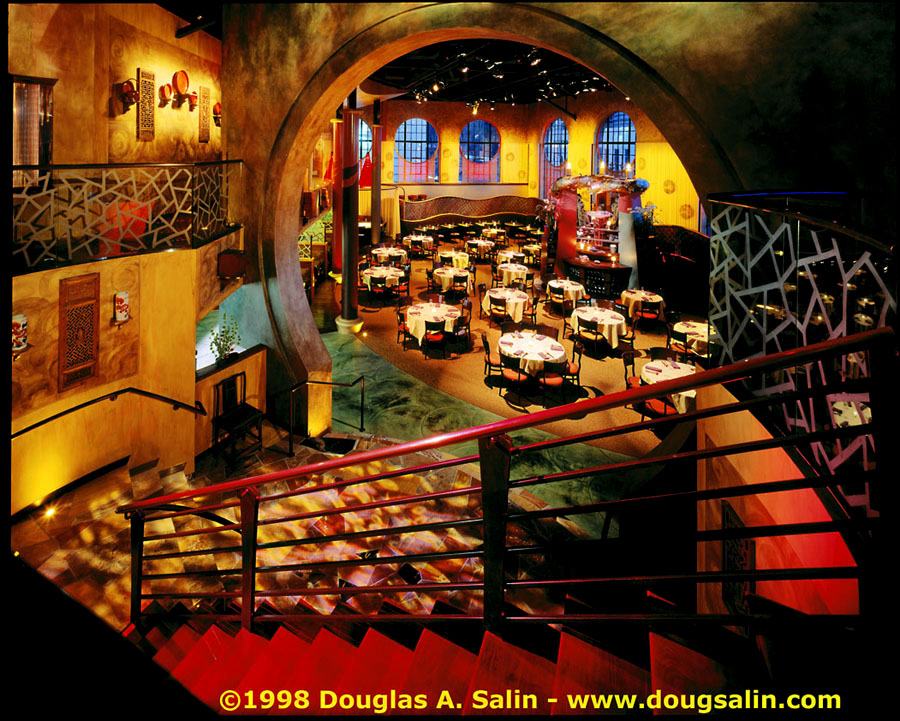 1999: After only 13 months in business, Loongbar -- the acclaimed San Francisco restaurant conceived
by chef and author Mark Miller -- has closed. It will reopen this summer as an Asian restaurant
called Ana Mandara, with an infusion of cash from actor Don Johnson. Loongbar was an
ambitiously innovative effort, combining pan-Asian cuisine and decor. However, its Ghirardelli
Square location was off the beaten path for locals, and its serious cooking was not geared toward
the many tourists frequenting the area. Miller left Loongbar last November to its majority owner,
Real American Restaurants.

Chef Bio: Mark Miller
The internationally recognized chef, restaurateur and
author attributes his interest in regional and ethnic
cooking to having studied anthropology at the
University of California at Berkeley. In 1979,
two-and-a-half years after graduation, Mark Miller
undertook his first venture opening the Fourth Street
Grill in San Francisco. The restaurant is now
considered a classic of the American wood-fire grill
genre. Due to his interest in the American Southwest
cuisine, Miller opened the Santa Fe Bar & Grill in
Berkeley and later moved to Santa Fe to open the
now legendary Coyote Café.
In 1992, Miller opened the Red Sage in Washington,
D.C. forging a new regional cuisine, defined as
"modern Southwestern," and captured the spirit and
style of the American West in both design and
cuisine. In December of 1993, Miller mastered the
true modern Southwestern style with the opening of
the Coyote Café and Grill Room at the MGM Grand in
Las Vegas.
Continuing to draw inspiration from different
cultures, Miller turned his expertise and passion to
Southeast Asian cuisine and opened Raku an Asian
diner in two D.C. locations. Diners can experience
Miller’s take on local ethnic dishes from Japan,
China, Thailand, and Vietnam. He also opened
Loongbar ("loong" being the Chinese word for
dragon) in Ghirardelli Square in San Francisco.
>From the beginning of his career, Mark Miller
received critical acclaim and honors and has been
recognized as one of the most influential chefs. He
received awards for all of his restaurants, including
"Best Southwestern Restaurant" for the Coyote Café
by the James Beard Foundation in 1996. Miller is the
author of nine cookbooks, including the best-selling
Coyote Café Cookbook, the Great Chile Book, The
Great Salsa Book and Mark Miller’s Indian Market
Cookbook. In 1992, Miller further popularized
Southwest cuisine through retailing the Coyote
Cucina line of specialty products, based on the
recipes from Coyote Café. Miller is also an active
food consultant and a key speaker on national and
international panels on history and sociology of
food.
Mark Miller is owner/operator of Coyote Cafe in Santa Fe, New Mexico, and at the
MGM Grand in Las Vegas; Red Sage in Washington DC; Raku in Washington DC and
Bethesda, Maryland; and Loongbar in San Francisco. He also has an academic
background in anthropology. He thinks one reason Americans have steered clear of
the study of food is that it makes them uncomfortable. "Probably because of our
Puritan heritage, food borders on a taboo subject, like sex," he says. "Plus, there's a
romanticism with food. It's very emotional, and it's associated with idealistic
things-mother and home and comfort. Most Americans don't want to disturb their
romantic imagery by thinking about digestion or other physiological processes."