The "Pic of the Month" is a fun look at the behind the scenes stories, antics, and events from some memorable architecturallighting images. Enjoy.
(If you would prefer to not receive these stories, please e-mail me and I will remove your name from my list. Please pardon my intrusion.)

A Perfect 10 - "The Deluxe Nightmare of Mercury Vapor"

The year was 1990. The Hubble Space Telescope was traveling through space. I was traveling
to the Hamptons on Long Island.
This was one of my earlier air travel jobs as an architectural lighting photographer (see note
below). I got to fly to New York, and it felt pretty good... 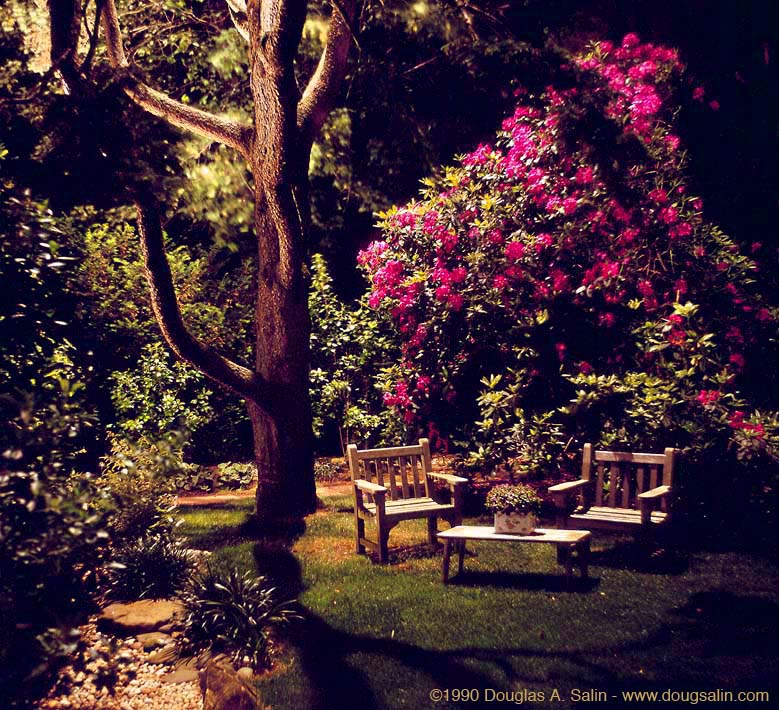 After a lengthy conversation about his projects, the subject turned to his lighting, and which
lamps he used. He explained that he used a Deluxe Mercury Vapor lamp( http://www.p2pays.org/ref/32/31148.pdf ).

I was, of course, clue less. Until then, I had no
experience with Deluxe Mercury Vapor lamps. I figured the smart thing to do was to have him
send me a sample light fixture (Greenlee) with a sample lamp, so I could do some film tests.
When taking color photographs under unusual or unfamiliar light sources, be prepared for
some unusual results. Test first if you can.

What looked reasonable to the eye would be very, very cyan on transparency film. On transparency films, color correction is done using the complimentary color, so red was the color to use with this lamp. But, how much? My strongest red filter alone was not strong enough to handle the excess cyan of these nasty lamps. The solution was to triple up several red filters. With about 70cc (units of color correction) over the lens, and the film would be color balanced. I used glass filters to prevent the possibility of Newton rings, since plastic and gel filters have curvatures that can create the rings.
http://tnweb.tn.utwente.nl/inlopt/lpmcad/mcaddocs/newtonrings/newton.htm

The loss of light transmission due to the red filters over the lens became the big issue. What was a normal exposure of 30 seconds in the studio with no filter (bad color) became a 4 minute exposure when the red filters (balanced color) were added over the lens. By removing the cyan with the red filters, I was also removing or neutralizing most of the lamp's light output. A colored glass filter actually absorbs it's complimentary color and transmits the rest.
http://216.110.168.55/march2003/jaltengarten3_2003.shtml In this case, the cyan was absorbed by the glass filter. The rest of the color spectrum passed through the filter, albeit very little. Since much of the lamp's out-put in lumens, comes from the cyan spike, I necessarily removed most of it's light. This is called the filter factor. The original 160 watt
lamps were now the equivalent of 40 watt lamps. The resulting 4 minutes of exposure on 4 x 5 film was acceptable under good conditions. (Try taking pictures outside with 40 watt bulbs!) I was ready and prepared for the challenge...

Greg Yale picked me up at Kennedy and we drove to Southampton. He later escorted me out to view several of his finished projects. I observed that ALL of the tree mounted fixtures, at ALL of the sites we visited, were different
than the one he sent me. Light baffles, called "louvers" were installed over the lamps.
http://www.britannica.com/eb/article?eu=50287&tocid=0&amp;query=lath
Simply speaking, these louvers look like honeycomb waffle with holes for the light to pass through.
http://www.residential-landscape-lighting-design.com/store/PPF/parameters/1537_401/more_info.asp
These were about 3/8ths of an inch thick and were black anodized. They prevent light from exiting the fixture to the sides. They allowed for a beautiful non glaring installation. The effect was very pleasing. There was little or no stray light, which is very desirable. Elegant installations.

Unfortunately, a sample louver had not been sent to me for my color and exposure testing. It did not occur to me to ask either.
Photographically speaking the added louvers created a nightmare. They decreased the light output of each source by about 2 additional f stops. The basic 4 minute exposure was now increased (by a factor of 2) to 16 minutes (with the added potential of color "reciprocity"failure on the film). http://photography.about.com/library/weekly/aa082602c.htm The 16 watt original lamps, that were reduced to 40 watt as a result of the glass filters, were now 10 watts of output due to the louvers. Yikes!!! As a compromise, I settled for 8 minuteexposures and opened the lens 1 f stop(f16). F16 on a 4 x 5 camera is not a very good f stop.
Focus becomes extremely critical. A few Polaroids were taken and adjustments were made. When it came time to shoot the 6 pieces of film (48 minutes) it was late into the evening. Time flies, not to mention wind, the earth, and bugs (see below) ...

The film was sent by messenger to Manhattan the next morning for pull processing, and rushed back to Southampton the following afternoon. The result was a very pleasing garden shot with full mood, excellent color, and not too much wind motion. I hope you enjoy the shot.


Upcoming Travel Itinerary(Tentative):
(By combining costs with my other travel projects, you/your firm can save on Travel costs)


Previous "Pic of the Months" may be viewed at:
http://www.dougsalin.com/pom/gallery/pom_gallery.html

Light Show West 2004 Update:
For the second year, my work (60 plus images) will be shown in conjunction with the Light
Show West trade show beginning October 12, 2004 at Moscone Center in San Francisco.
I hope you can make it. This year I'm also giving a lecture about some of my work.
http://www.lightshowwest.com/specialevents.asp
PS - Because this image was produced on large format, 4 x 5 film, it can be enlarged well.
The print of this image in my show is stunning. Lots of detail.


Conclusion:
In retrospect, I would not recommend shooting Deluxe Mercury Vapor on 4 x 5 transparency
film. It is not for the faint of heart. It is very tricky to get right. Color, and wind are serious
problems. I would recommend a negative film such as Fuji NPS or similar. These films have
built in filtration that balance the color spike of the lamps better. This reduces the exposure
time. A high quality digital camera would work as well. A heavy tripod and sand bags for
your camera are also good ideas.

Translating colors to film or digital:
Color temperature(http://www.schorsch.com/kbase/glossary/cct.html) and film.
An interview question architects and designers frequently ask is, "How do you deal with
fluorescent lights?" I find this amusing at times. I usually say something like, "What's a
fluorescent?"
The issue of how a perceived color is translated by film or digital is important. It's all about
seeing and capturing. Clients like to see their color palette faithfully reproduced. Should the
resultant image be warm, cool, or neutral? Choices have to be made. The photographer must
understand how the various light sources will translate to the final image.

For starters, knowing the color temperature of every light source is helpful and only part of the
answer. If someone tells you the lamp is a 3500k lamp, that will only help a little. The color
rendering ability or color rendering index (CRI) of the lamp may seem ok to the eye but not
necessarily to the film. Lamps with higher CRI values will photograph better. If you could see
all of the light spectrum emitted by the lamps you might be surprised to learn that many lamps
contain strong spikes of garish colors. The color spikes must be balanced with filters to match
the film. Any color temperature deviation will show up later on the film or print. Sometimes
we just live with this difference. In many cases it must be corrected. Gels or Photoshop?
Hmmm.
Most "pro" films can be either daylight balanced (5500k) or tungsten balanced (3200k) .
Kelvin measures the absolute temperature of an item. At 0
kelvin(http://www.wordiq.com/definition/Kelvin), all movement stops and the any object's
molecules form a solid.
Throw daylight into the mix with fluorecsents and imaging gets more complicated.
Transparency films and digital have trouble with these mixes of color temperature. Color
negative films can overcome many of these problems. Color negative film like Fuji NPS and
Reala reproduce what you see (http://photography.about.com/library/weekly/aa082602d.htm).
What can be imaged quickly on digital, often requires many hours of digital retouching.
Choose your approach carefully. Most color casts can be corrected in Photoshop. The answer
is either color correcting gels and filters, or lots of Photoshop. Both require time, but both
work.

Baggage issues:
Those first few travel jobs back in the early 80's, shooting annual reports, were economical
travel nightmares. I had the silly notion that pros "air freight" their equipment, perhaps to the
tune of $600 to ship all my gear one way. For a previous multi-legged trip, my unfortunate
client spent a fortune getting my gear to the location. Mea culpa.

I mentioned this high cost of shipping my gear to a few pros in San Francisco. They laughed at
me and said I was crazy. I learned to just put all my gear in plastic tubs and show up at the
airport. "Slip the Sky Cap $25 and he will process all of the bags," was the advice I got.
Another way to get extra bags accepted without paying excessive charges is to be polite and let
the Sky Cap find a reason to cut you a break. They would usually find a way to include a few
extra bags, because most of them knew that it meant a large tip.
On this project, I got the chance to refine the new and improved shipping method. It worked
like a charm--lesson learned! I've said it before and I'll say it again: Being a pro just means
you've made more mistakes than an amateur. You stay a pro by not repeating mistakes. This
approach worked well for the many years up till 9/11.


On a Comical Note:
The night before this great shot, I was still trying to make 32 minute (f 22) exposures at a
different location. I was on my second or third polaroid, some 2.5 hours into the shoot, when
many of the sprinklers in the garden turned on. The timers had been programmed to start at
night. I was there alone, with no phone. The house was locked and empty and the housekeeper
had gone to a movie. I looked desperately for the shut-off for the sprinklers, but couldn't find
it. Things got wet. I watched my almost perfect shot become soaked right before my eyes while
I waited for the return of the housekeeper. An hour later he showed up and showed me which
plant had the control beneath it. (Note: Now I always ask about sprinkler controls and
timers.) I was just settling back in to do the final polaroid (1 hour later), when the garden
itself began to disappear. Like the city I call home, the Hamptons have fog. In less than 10
minutes, I could no longer see from one end of the garden to the other. I was almost finished
setting up, yet nature provided the knockout blow. My planning and experience were no match
for the fog.
Also, being a San Franciscan, I'm not accustomed to bugs at night. Our fog and strong winds
effectively ground most flying bugs, so we have very few bugs in the Summer. I'm always
surprised at the variety and size of flying and crawling critters I see when I travel. I was
working alone, out of my client's vehicle on this job, and I was not doing a very good job of
keeping his SUV closed. By the time I left at 2:00 AM, the inside of the SUV was literally
crawling with bugs. One large, 3 inch beetle had snuggled up on top of the gear shift lever, and
was singing to me. I guess it might have helped if I had turned off the interior lights or closed
one of the many open doors. Oops.
I went home in a rather grumbly, itchy mood. The next night I was luckier. See above...
Peace.