The "Pic of the Month" is a fun look back at the behind the scenes stories, antics, and events from some memorable architectural lighting images. Enjoy.
(If you would prefer to not receive these stories, please email me and I will remove your name from my list. Accept my pardon for intruding.)
Welcome, this month, to all the wonderful people I met in New York at Lightfair... 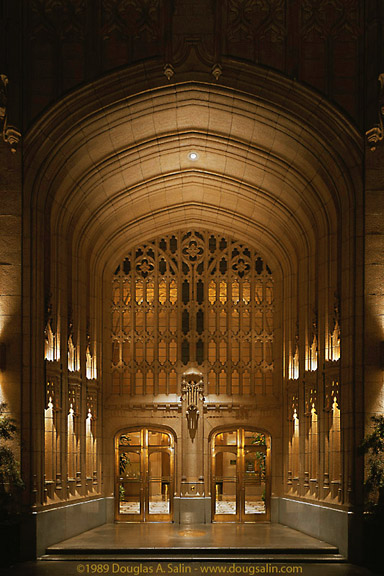 The Story...
September 1989, starting at 6pm in the early evening at this Montgomery Street location in the heart of San Francisco's financial district, the two of us were fresh with excitement. The historic Russ Building is one of San Francisco's more remarkable structures, reflecting back to a time when charm and elegance were the norm. (See links for a more detailed history.)

Thomas Skradski, of Luminae Souter Lighting Design, was the project manager and principal lighting designer of this lighting project. Thomas & I gathered at the site at the end his normal work day. Two weeks earlier, we had photographed the building interior. We had hoped to be finished around 9pm or so. In order to keep costs to a minimum, and since this was going to be quick, my assistant for this "simple" evening was Tom. (Photo assistants can come in handy.)

Our shot would need to be taken from the middle of the street. We noticed that evening, that PG&E(Pacific Gas & Electric), was doing a fine job of working in a large hole adjacent to our shot. . Montgomery street is one way. They were stationed next door to us, outside, and in the middle of the street. They had set up a line of orange traffic cones along Montgomery street to divert the three lanes of traffic down to one on the far side, away from us. So, the cones helped to effectively block 2 of the three lanes of traffic for us. We felt like everything was coming together to help us out. We elevated and mounted the camera on my sturdy aluminium ladder. We placed the camera out of harms way, but ready to go. We hoped that PG&E would be kind enough to turn off their "glare bomb" work lights at the critical moment. There was so much light trespass that the shot would not be successful without their cooperation.

Technically, when you do a street shot on the streets of San Francisco, you are supposed to secure and pay for a "permit" from the Police department. Since my work is on such a small scale, and generally quick(relative to motion picture work), I usually avoid the cost and wasted time of the permit process. The Gonzo style works well here, along with a quick apology, should I have to explain my actions to the police if, they do come by. Usually it is not an issue. On this project it was not an issue.

After pondering our PG &E situation,we decided to get fussy about the "up lights" on the buildingð The up lights needed a bit of focusing, so we started there. All was proceeding with normal speed until... We adjusted the second and third up lights on the right side, from a ladder we borrowed from the building manager. We began to notice that everywhere we had touched, with our hands, we saw large yellowish streaks against the enameled terra-cotta facade. Actually, they were not streaks. Everywhere we had touched revealed, the underlying true building color, laying beneath a heavy layer of street soot. What had appeared to us as a grey stone exterior, was in fact a marvelous warm toned terra-cotta building. (Terra-cotta, favored by contractors of the past, was used to clad buildings because of its light weight, and its proven ability to withstand fire. Gladding, McBean, the Bay Area's leading terra-cotta manufacturer, developed a tile called Granitex, which could be colored to look like stone.) The color was beautiful. Tom & I decided the exterior had to be cleaned. OK, 7pm and not a volunteer in sight, except the two foolish guys taking the picture. (An assistant sure would be nice.) Out came the tallest ladder we could borrow. We took turns brushing the exterior and standing on top of the ladder to reach as high as we could. We were using an old 14 ft rickety wooden ladder. (You know the kind.) My push broom head served as a brush, and we were now cleaning the entire facade, within the limits of our camera angle, from as high as we could reach from this not so sturdy ladder. We worked from the top on down. Hours later, we had successfully revealed an exquisite glowing building beneath all the gunk. Our arms and legs were covered with the stuff, as well as the ground. Tom began sweeping. Most of the soot was swept away, but some lingered. Our attention now turned to the windows. When the building was greyer, we paid little attention to the windows. With the exterior now glowing we noticed the windows were in need of cleaning. (For photography purposes the windows sometimes need to be extra clean.) So there goes Tom up the ladder again to clean as many windows as he could reach. Some showed more dirt than others. 1:45 minutes later, windows cleaned. Now to the pavement at the bottom. It looked dry and lifeless. I suggested we wet it down. Tom found a mop and bucket to wet the granite down. More time passes. He soon found out that there was still a sufficient amount of soot on the ground. When mixed with the wet mop, the soot on the ground still looked quite ugly. It was like black tempera paint. So Tom proceeded to mop and mop and mop... The stuff took forever to come up. Finally he was successful and we continued to the camera portion of the shoot. Tim was flying by.

Well, by then it was 4am, PG&E had finished for the night/morning and was quickly closing up shop. It was 4am and time was running out. Our security was going away. The sky would start to get light by 5am. The PG&E "glare bombs" went out, and the orange protective safety cones were quickly gathered back. We were now in the street with very little protection. Our safety cushion was gone. Now Tom was transformed into the traffic control guy. Waving his hands to fend off motorists, one cabbie stopped by to tell Tom, "you guys are nuts" (for being out in the middle of a not so quiet street, on a ladder, with a large camera) . We were beginning to shooting film. Meanwhile, as I'm shooting the first of six pieces of 4 x 5 film, I noticed, and mentioned to Tom that the granite foreground was drying out. Would he be so kind... He quickly applies another light mopping, while I guide traffic around the camera and we're on to the last sheets of film. I hurry to finish the shooting before the granite dries out again. Tom spends the "exposure time" waving his arms(looking like a mad man) at the approaching traffic from down the block. This is done to keep the headlights of the cars from showing in the glass doors. In between exposures we allow the cars to pass. In the era prior to "Photoshop" any retouch was costly. My goal was always to make the shot complete, at the time of the shoot. Most clients do not like paying for retouching. The shot we started at 6pm thinking it would be a couple of simple hours, turned into an 11 hour marathon for us. By the time we finished and packed up, it was 5:30am and we went home...

Tom explained to me recently, that he fell asleep in his driveway after he got home. He awoke 30 minutes later to find the car still running. Fortunately for Tom, he was not in an enclosed garage, otherwise the story would had a different ending.

Thank you Tom for all your hard work. It shows...